I recently came across this blog on yahoo news and thought it would be great to share! We have seen and heard from celebrity supporters of both Romney & Obama that have cause some surprise among the Black community, but this one seems to have touched a larger pool of Obama supporters (young Black Americans) and others who seem to be shocked and confused. Though I myself cannot see why Ms. Dash would be a supporter of Mitt Romney, (nor do I understand the photo she posted to twitter) I agree that she does indeed have her own opinions and rights to vote and lend support as she chooses and perhaps twitter was not the best way for others to lash out against her…See the full story below; I am interested to know what others think??!! 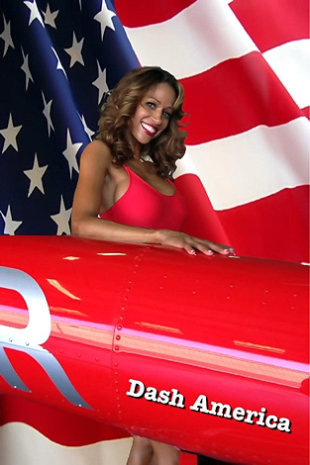 photo by: Stacey Dash/TwitterActress Stacey Dash was attacked with negative tweets after voicing her support of Mitt Romney on Twitter over the weekend. Many comments were racially charged and others suggested the star of the 1990s hit ‘Clueless’ should just “kill herself.”

One man wrote, “This hurts, but you a Romney lover and you slutting yourself for the white man only proves why no black man would marry u.” Another Twitter user said: “She’s an indoor slave, you know that, sis.” Many tweets expressed disbelief that a woman of African American heritage would vote for anyone but Obama, and some suggested that her account must have been hacked.

The backlash began on Sunday, after Dash tweeted “Vote for Romney: The only choice for your future,” along with a provocative photo of herself wearing a red Baywatch-style tank suit standing in front of an American flag. “Kill yourself you old hag…” a Twitter used lashed out. “The only choice for your future.” Another wrote, “You’re an unemployed black woman endorsing @MittRomney. You’re voting against yourself thrice. You poor beautiful idiot.”

Some, notably, Obama supporter Sandra Fluke, who was branded a “slut” and “prostitute” by Rush Limbaugh in March, called for the barrage of ugly tweets to desist. Limbaugh used the degrading language after Fluke, a law student and women’s rights activist, was in the news for being barred from testifying to a congressional committee on government contraception coverage. “So disappointed to see people attacking @REALStaceyDash for voicing her opinion,” Fluke tweeted on Monday. “Disagree politically, but #racist comments are unacceptable.”

Dash defended herself to the Twitterverse as well: “My humble opinion…EVERYONE is entitled to one,” the actress tweeted in response the controversy. On Tuesday, on Piers Morgan Tonight she elaborated, “I really don’t understand the fury…I was shocked, saddened–not angry. Saddened and really shocked. But you know what? You can’t expect everyone to agree with you.”

Supporters from across party lines have created the hashtag #ISupportStacyDash to defend the actress and also to have conversation about freedom of speech and civility in political discourse during the last weeks before a heated election.