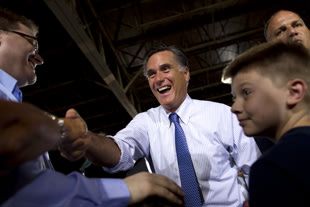 Speaking at a campaign event in St. Louis, the Republican nominee said it is “painfully obvious” that Obama was “inexperienced” and “simply not up to the task” of leading the country out of this “great economic crisis.”

“We have waited, and waited and waited for recovery, and enough time has passed to pronounce judgment on the economic policies of this administration: They have not worked,” Romney told supporters at a campaign event in St. Louis. “Your government has failed you.”

The Republican nominee accused Obama of being unfriendly to “free enterprise” and said his administration has failed to deliver on its chief commitment to the country: helping “every American help themselves.”

“I do not believe this has been done with evil intent or ill will,” Romney noted. “But for a family watching their house being sold at foreclosure, or the family that is forced to spend their kid’s college savings just to make ends meet, the results are just as devastating.”

Romney vowed to do “everything in my power to end these days of drift and disappointment,” suggesting something is “fundamentally wrong” with the country’s course when 23 million Americans remain out of work.

“Yet the president tells us he’s doing a great job,” Romney said. “I will not be that president of deception and doubt. I will lead us to a better place.”

Romney’s remarks in Missouri expanded on a general theme the GOP nominee has been pushing on the campaign trail in recent weeks. He’s argued that the nation’s economic struggles are not just a test of policy but a “moral” issue because of the suffering of so many Americans. In his remarks today, Romney used the word “moral” or a variation of it five separate times in pushing the idea that Obama’s policies have been a failure for the country.

Echoing a message he repeats regularly on the trail, Romney accused Obama of trying to restart the nation’s economy by building up the government rather than helping private business. He called Obama’s vision for the country “deeply flawed.”

“There is nothing fair about a government that favors political connections over honest competition and takes away your right to earn your own success,” Romney said. “And there is nothing morally right about trying to turn government dependence into a substitute for the dignity of work.”

Under Obama, the country was on the brink of a “government-led economy,” the GOP nominee warned.

“It doesn’t have to be this way,” Romney said. “These have been years of disappointment and decline, and soon we can put them behind us. We can prosper again, with the powerful recovery we have all been waiting for, (and) the good jobs that so many still need.”

I find it outrageous to believe that a Republican Agenda can ever be a means of “helping EVERY American help themselves”….the basis for the modern Republican ideology is the exact opposite. We are a nation that screams “equality for all” and I do believe in capitalism and a free enterprise, but the way we have gone about it has come at the expense of true equality and more than that equal access for all. Trina Madry once said, “Never mistake comfort for equality”…In the last 25 years, on an average more Americans became more comfortable, leading them to believe that real equality existed and when the nation’s economy tanked, it then became an issue. Now here we are four years into trying to truly make a change for the best, and people are ready to give up & switch to a different leader thinking it will change things? Well, they are correct, things will change if Romney becomes president, but in my opinion it will not be for the best. We have seen the conservatives undercut, undermine, and wreak serious havoc on congress and in many states in terms of some of the very important areas that affect EVERY American….public education & other public services. Yes, many people have had to leave their homes due to foreclosures, and yes there are still millions without jobs, but we cannot expect for someone to snap there fingers and have things happen overnight. It took years to bring about the destruction, and it will take years to rebuild…we should know that just from looking at US history….our government serves a valuable purpose and it is our duty as leaders of the free world to be informed, vote to exercise our rights, and  continue to hold in place someone who is truly making attempts to balance equal access…it will take more time but it can be done.